This page covers the general information about Random Events that occur on the Asylum servers. Random Events occur at different times each restart period, and some may appear multiple times.

Once per server restart period on a random night, extraterrestrial activity may appear on Asylum. Players are warned that mysterious lights have been seen in the night sky. After a few minutes, a UFO will crash to the surface.

Rebel Plane Crashes happen at random throughout the Island. A KOS red zone is automatically in place surrounding the airdrop, where other potential players can be interested in the crash.

The contents of the crash vary each time, containing different weapons, ammunition and scopes.

Furthermore, virtual inventory items are also a part of the airdrop, containing redgulls, lockpicks and speedbombs, and high value drugs.

NOTE: APD Officer discretion to attend. Standard Red Zone rules apply, Must have 1 minute all clear prior to seizing the crate unless there is no combat when officers arrive, then the crate may be seized immediately.

Rebel Airdrops happen at random throughout the Island. A KOS red zone is automatically in place surrounding the airdrop, where other potential players can be interested in the airdrop.

The contents of the airdrop vary from airdrop to airdrop, containing different weapons, ammunition and scopes.

Furthermore, virtual inventory items are also a part of the airdrop, containing redgulls, lockpicks and speedbombs.

NOTE: Cops are not allowed to patrol rebel airdrops, unless in active visual pursuit or warrant tracking. 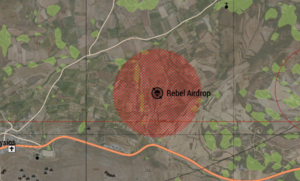 Medical airdrops happen at random throughout the Island. No redzone is applied to the airdrop.

Medical airdrops spawn medical equipment that can be used such as defibrillators, blood bags, and narcan-shots. 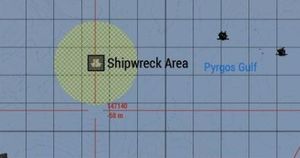 Shipwrecks are random events that occur around the island, typically off the coast of the island. The three spots are off the coast of Kavala, Pyrgos, and Panagia. These sites are deep underwater, and it is suggested to bring: Wetsuit, Rebreather, and Carryall Backpack. This will allow you to transfer as much of the Flawless Diamonds, Rubies, Diamonds Cut, Diamonds Uncut, Gold Doubloons, Pearls, and Treasure Maps to the Jewelry Store as possible. Additionally, an underwater gun or SDAR is advised. While this gun is illegal to the APD it will allow you to defend yourself against other Shipwreck divers. Due to the large amount of potential money in these events many people will be armed and may be a threat. SHIPWRECKS ARE NOT RDM ZONES, if you attempt to rob somebody proper initiation is still required.

Diamonds Uncut must be processed to Diamonds Cut at Mineral Processing before it can be sold at the Jewelry store.

Treasure Maps must be discovered and used to find the associated treasure before it can be sold. There is a large market amongst the player-base for Treasure Maps, and often can be listed successfully on the Asylum Exchange. \

SDV's with Upgraded Virtual Storage is the vehicle of choice as this allows you to dive to the level of the shipwreck rather than swimming up and down to a boat. Often times shipwrecks are hundreds of meters below the surface of the water so the increased potential to be robbed or miss out on some items is large. The potential profit from shipwrecks is large so be careful selling things at the stores, and driving to an ATM.