Hello! If you're reading this guide it means you have selected to play the most neutral role on the server. Medics are an unarmed independent faction seeking to save lives rather than take them. Below you will find all the information on being a successful medic. This role can be played by anyone.

Before you head out to save lives it's best to set up a few Key binds and custom controls.

Pre-Existing keys are ones that you don't need to set up but should be aware of.

Custom controls are set by hitting the escape key > Clicking Configure > Followed by Controls > From the drop down menu select "Custom controls" > Finally assign your desired key to the use action.

You have successfully setup your controls and are ready to enter the Asylum. The first thing you should do is select an Asylum server (1-3); generally medics prefer the more populated servers but as all of our servers sync your data and all your progress will be saved no matter which server you select!

You're now in the server ready to begin your life as a medic, your first decision is to select a spawn.

Kavala - The most populated of the cities and a good choice for beginner medics as everything will be close and there will be many medic requests. Be aware it is also crime ridden and as a medic you will have no way to stop someone from robbing you for anything from cash to your clothes. This is the only spawn where you can buy a medic helicopter (More on that later)

Athira - The second most populated city, however armed rebels and police will often fight here. It is also a good choice, just be sure to keep your head down to avoid being caught in the cross fire.

Pyrgos - Third most populated city, however, it is near the bank and the prison. Home to massive firefights occasionally thus you can sneak in during a firefight to get some dangerous but quick revives for cash. This is recommended for expert medics as you will need good decision making and timing to make money.

Sofia - Least populated city and is not recommended for any medic.

Now that you have chosen a spawn you will be armed with a:

To use any of your items simply scroll wheel on a civilian to apply the needed medical item. Healing/Reviving/Splinting/Pain Killing will net you talent points which can be used for bonuses.

In addition, no matter where you choose to spawn, you will be paid a paycheck amounting to 125$ every 5 minutes of real time spent on medic.

As a medic you can earn up to a total of 9 talent points.

There are five vehicles in the EMS motor pool. The Hummingbird, SUV,Ambulance Van, Hatchback Sport, and the Offroad.

For 800$ it is the cheapest of medic vehicles, while the SUV may be faster, the Offroad is cheaper and has more function, such as the ability to repair your own or someone else's vehicle on the road for free. I personally have gotten up to 201 KM/H in the Offroad going from Sofia to Pyrgos. While the Offroad is capable of hitting high speeds, the traction on the tires decreases the faster you go. If you learn how to use this to your advantage, you can out perform the SUV and achieve fast response times. 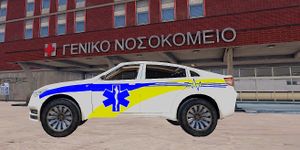 For $2000 you can own the second unlockable vehicle, the SUV is the fastest car in the arsenal, as well as the flashiest. Achieving high top speeds is easy in the SUV, but cornering is hard. The SUV has an acceleration that makes it well suited for the cities like Kavala and Pyrgos, but its lack of agility makes it rank third in off road ability. 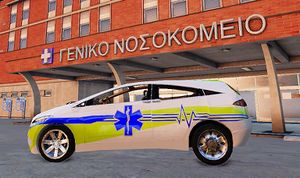 For $5000 you can own the fasted land response vehicle in the medic arsenal. Topping out at 325km/h getting to those distant calls will be no problem for you. 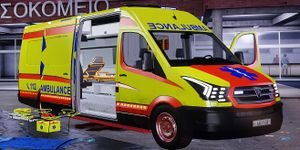 For $2500 you can own the third unlockable vehicle. The Ambulance is the closest resemblance to an actual EMT vehicle, providing superior roleplay capability. It has slow acceleration but great durability. The rear seating has medical equipment to promote roleplay even further. This vehicle boasts 2 sirens as well. You can use the back of the ambulance to treat yourself without using medical supplies. 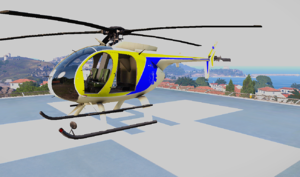 For $20,000 it is generally reserved for expert medics with cash to spend. Purchasing this means you want to patrol the skies and get out to the farthest corners of Altis. We need more people like you. The Hummingbird is the hardest vehicle of the EMS to master. Unlike the other land vehicles, you need to practice to get the hang of it. Responding in a Medevac has its own issues, like landing, that arise when you get on scene. Despite the high price and skill needed, when used right, you can achieve the best response times, flashiest entrances, and have the most fun. Just don't hit power lines.

Note: Only purchasable on the top of Kavala hospital

Most of your time starting out will be spent sitting in your desired city role-playing and healing players. However you will randomly receive both Dispatch notices and Medic requests.

Medic Requests will appear in the top right hand side of your screen. It gives you the player name and distance, pressing 8 on your keyboard will accept the request and places it on your map. Hitting M scanning the map looking for the marker then placing your cursor on it then Shift + Left click will place a waypoint to the request.

Much like a Medic request, however, it is a 911 call from a player with a custom message. Players will often ask for medical assistance using this feature, when they do so it will place a "Dispatch" ping on the map.