Getting Started in the Settings

Before you start hunting, hit Y to open the phone, and then press "Settings"->"Enable Ambient Life" This way the animals will appear on your screen.

The hunting grounds now contains a store with plenty of outdoor supplies, such as hunting firearms, food, tents, campfires, and skinning knives.

This serves as a great start for new players who wish to get a foothold in the server with a relatively risk free experience.

To begin your career as a Hunter you will need:

The Hunting Grounds are located north of Athira, slightly south west of the northern Rebel Outpost. It is marked as a yellow circle. 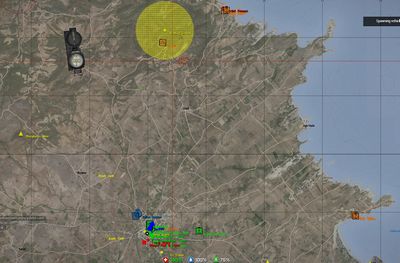 Pull or buy a vehicle from Athira DMV and drive 3.7 Km up to the Hunting Grounds.

Below outlines the steps for Legal animal hunting.

After all of your meat has been cooked, take the Cooked Dog Meat to Wongs Food and Liquor to be sold. Be careful, the Wong's building is an Illegal RDM zone. (Dog Meat is Illegal). The rest of your Cooked Meats, will be sold at the Market, there is a market in every major city yet the one in Athira is the closet. Pull your truck in behind the building and sell quickly! Athira is a dangerous place for new players and the potential to be robbed is signifigant.

Varied - Profit varies on the type of animal meats you sell, especially if you cook them for maximum profit.

This can further be increased by selling illegal dog meat.