Below is the current map of Asylum Altis Life as of 8.2.1.

Note that cartel and drug locations change each restart.

Illegal Areas and Kill on Sight (KOS) zones are typically marked in red. 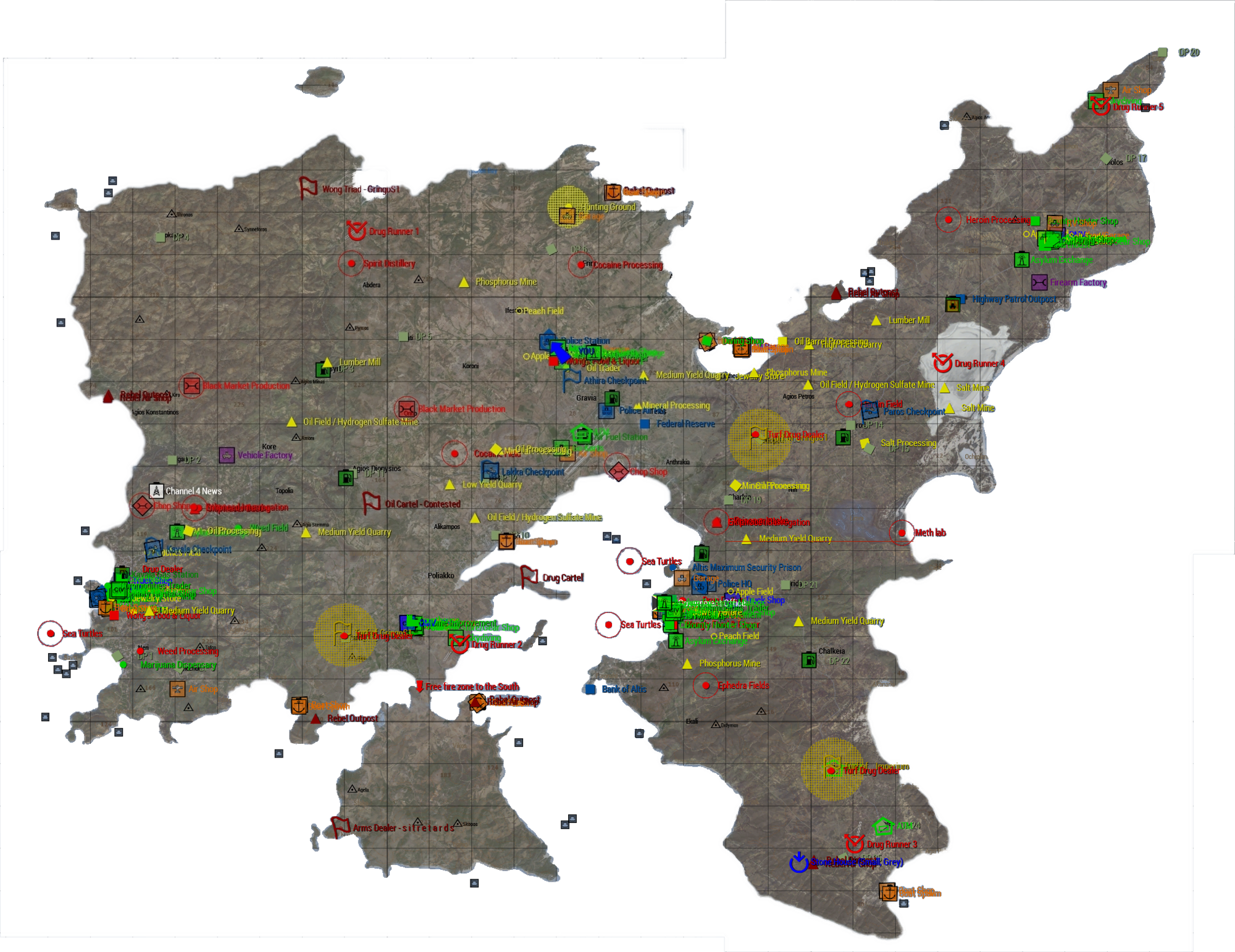 These are areas used by all civilians and are not exclusive to any specific faction in-game.

Used to buy vehicles, and acts as a garage to pull and store purchased vehicles.

Used to buy larger trucks, and acts as a garage to pull and store purchased vehicles.

Used to buy helicopters and airplanes, and acts as a garage to pull and store purchased vehicles.

Used to buy boats and submersibles, and acts as a garage to pull and store purchased vehicles.

Used to buy Arma 3 gear such as night vision, GPS, and binoculars.

Used to buy virtual items such as food, water, and tools.

Used to buy Arma 3 weapons and ammunition. This vendor has only a small selection of the weapons available. Note that the SDAR is illegal.

Used primarily to sell your fish from fishing trips, but you may also purchase fish.

Used primarily to sell items obtained from mineral processing or wreck excavating, and you may also purchase virtual items here.

Used primarily to sell processed oil, from the oil rig or land derricks.

Used primarily to purchase crates for your home, and locate homes for sale by players.

Used by the bounty hunter faction to regear and interrogate captured bounties.

These are areas where players may collect resources to make money or craft additional items.

An area where a fuel truck is required to drill for oil deep in the ground.

A platform out in the bay to drill for oil in the sea. A boat is needed to move the oil to the processing plant.

Shipwrecks under the sea of sunken cartel rebel ships, filled with loot to be excavated.

The salt flats can be mined for salt and reprocessed to sell.

A mine for phosphorus, a material sell-able on its own or useful in making illegal meth.

A mine for Hydrogen Sulfate, a material sell-able on its own or useful in making illegal meth.

These are areas to process collected materials into new items to use or sell.

Used to process items obtained from the quarries.

Used to process oil barrels obtained from the oil rig using a boat.

Used to process salt obtained from the salt flats.

Used to process logs into planks from cutting trees around the island.

Used to craft weapons to use or sell.

Used to craft vehicles to use personally.

Used to refuel all vehicles. Some gas stations include a vendor who sells virtual items and occasionally acts as a garage.

Used to send out news broadcasts for 30k.

Used to buy DLC Go-Karts and race clothing and helmets. The track can also be used to host mini races.

Airdrops throughout the Island, containing medical items such as bloodbags, defibrillators, and Narcan-shots.

Headquarters stationed around the island for the APD to regear at and process criminals.

Checkpoints stationed on the main highway around the island to perform mandatory vehicle and player checks.

The Federal Reserve holds valuable gold bars inside. Experienced rebels may attempt to rob the reserve to make large profits (this makes its surroundings become a KOS zone).

The Bank of Altis holds valuable banded banknotes inside. Experienced rebels may attempt to rob the bank to make large profits (this makes its surroundings become a KOS zone).

The Prison holds dangerous criminals that have been arrested or turned themselves in. Experienced rebels may attempt to break them out of it (this makes its surroundings become a KOS zone).

The Evidence Lockup holds high caliber guns that have been seized. Experienced rebels may attempt to get them into their hands (this makes its surroundings become a KOS zone).

Used for candidates wishing to run for governor

These areas are typically marked in red, allow for kills on sight inside, and allow for police to search anyone inside.

These areas provide drugs, illegal animal meat and uranium to be collected to be sold or reprocessed.

A field where weed plants can be harvested.

A field where heroin plants can be harvested.

A field where cocaine leaves can be harvested.

A field where ephedra plants can be harvested.

An area in the sea where turtles can be poached using diving equipment and an SDAR.

An area where you can gather radioactive material.

These plants allow the processing of illegal items into new items to be sold.

A plant to process weed into cannabis.

A plant to process heroin.

A plant to process cocaine into processed cocaine.

A plant to process your uranium ore to uranium (weapon grade)

A plant to process ephedra, phosphorus, and hydrogen sulfate into methamphetamine.

Places that you can sell your drugs, liquor, illegal meat and uranium.

Gang areas that can be captured. KOS only applies when red. Provide benefits and own shops to the gang possessing the turf.

Gang areas that can be captured for a supply of money. KOS always applies.

Areas where stolen vehicles can be brought to sell for cash.

Areas where drug planes go to and from.

Used to craft illegal weapons and vehicles to use or sell.

Used by the rebel faction to regear.

An island dedicated to the Arms Dealer cartel. KOS applies to the whole island south of the marker.

Crate with weapons and ammunition, dropped at random locations througout the Island.